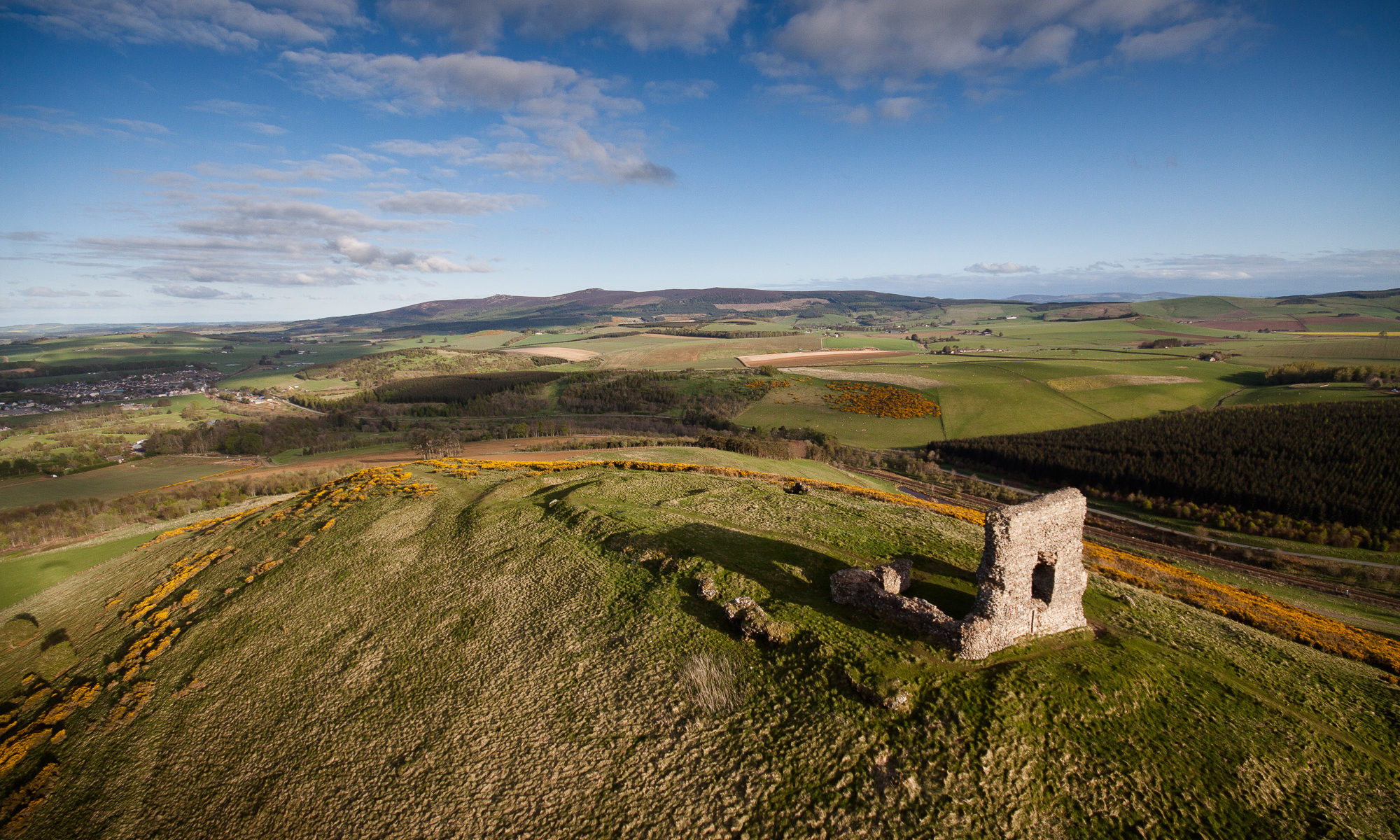 Overlooking the village of Insch, Dunnydeer is a small hill site offering simple soaring, top-landing, wagga flying, and the smallest possibility of an XC flight, if conditions are just right. The sloping landing fields are perfect training slopes and good places to ground-handle too.

The hill is the site of a ruined castle dating from c 1260 ad, of which just one wall remains intact. The castle is thought to have been built from the vitrified remains of a previous hill-fort, dating from c 250 bc.

Marginally in north-west and east-north-east.

From Aberdeen, follow the A96, turning off at the Oyne Fork, signed Oyne and Insch. At the railway station, turn right towards the town centre. After 600m, turn left on to Western Road, just after the Coop and continue for 1.5km along what becomes an inclined tree-lined avenue. At the top of the avenue, the road turns to the right; the car park is on the left.

Walk through the gate and head straight up the grass path, through another gate then continue to the top.

The hill is home to over 2000 years of history, please treat these stones with respect.

The castle walls, including the rocks that stick out of the ground near the castle, are made from vitrified rock which has sharp edges, and will tear wings and lines on contact.

It’s quite big, and hopefully quite obvious, but be sure to keep safe separation between yourself and castle during flight, take-off, and landing.

The belt of trees running away from the base of the hill, although parallel to the soarable wind direction, still sometimes create a leeside effect in the form of varying degrees of lifty and dead air along the soaring beat of the hill.

There’s plenty of gorse below launch which has consumed both the author and his wing on a couple of careless occasions. If low, push out to the fields below.

Rabbits have created plenty holes to twist ankles in.

Although there is a steep southerly slope, it’s committing due to the extensive gorse cover, and there are fewer landing options. Also the south side may be in the lee of Hill of Christ’s Kirk.

If considering the south side of the hill, it’s worth asking why you are there and not at Tap O’ Noth. If conditions are too strong on Tap, you may be launching just under stronger wind, or in to the lee of Hill of Christ’s Kirk.

The farmer is very friendly and is happy for paragliders to land in whichever field doesn’t have livestock in it. As viewed from the top of the hill, there are two equally-sized fields at the base, divided by a belt of trees. The field to the right (east) has the carpark at the far right corner and is preferable due to this, but if livestock are present, the field to the left (west) should be used.

Both fields slope away from the base of Dunnydeer; the east field slopes to the fence, therefore a cross-wind landing may be required. The west flattens out before the road so is easier to land in.

The ridge works mostly as expected, just soar back and forth till you get bored, then practise top landing, hovering, etc. Sometimes there are variations in the lift, often directly downwind of the belt of trees that divide the two landing fields. It’s well worth pushing in to wind any little bubbles, as they sometimes extend much further upwind that expected, sometimes far enough to safely get a turn in, building the enticing prospect of taking a climb out from the hill.

Be mindful of your drift in wind before considering any attempt at a full 360 in front of the hill. The hill works well in moderate to strong wind, therefore the downwind leg of a 360 can very quickly take you back to the hill.

When the wind is off to the east it can sometimes be very bouyant out towards the trees at the car park.

The little bowl-of-sorts at the west corner can work when the wind is off to the west.

Airspace associated with Aberdeen airport lies to the east, 4km from launch at the closest point, with corridors extending north-west and south-west of the airport.

Lossiemouth and Kinloss airspace lies approximately 48km to the north-west of launch.

8 June 2018 After 11 bottom landings that day, Kieran Campbell finally caught a thermal to be first person to climb out from Dunnydeer and fly cross-country. The flight was a small victory, as no other thermals were found, which at least helped minimise the self-retrieve distance. Flight on XContest.