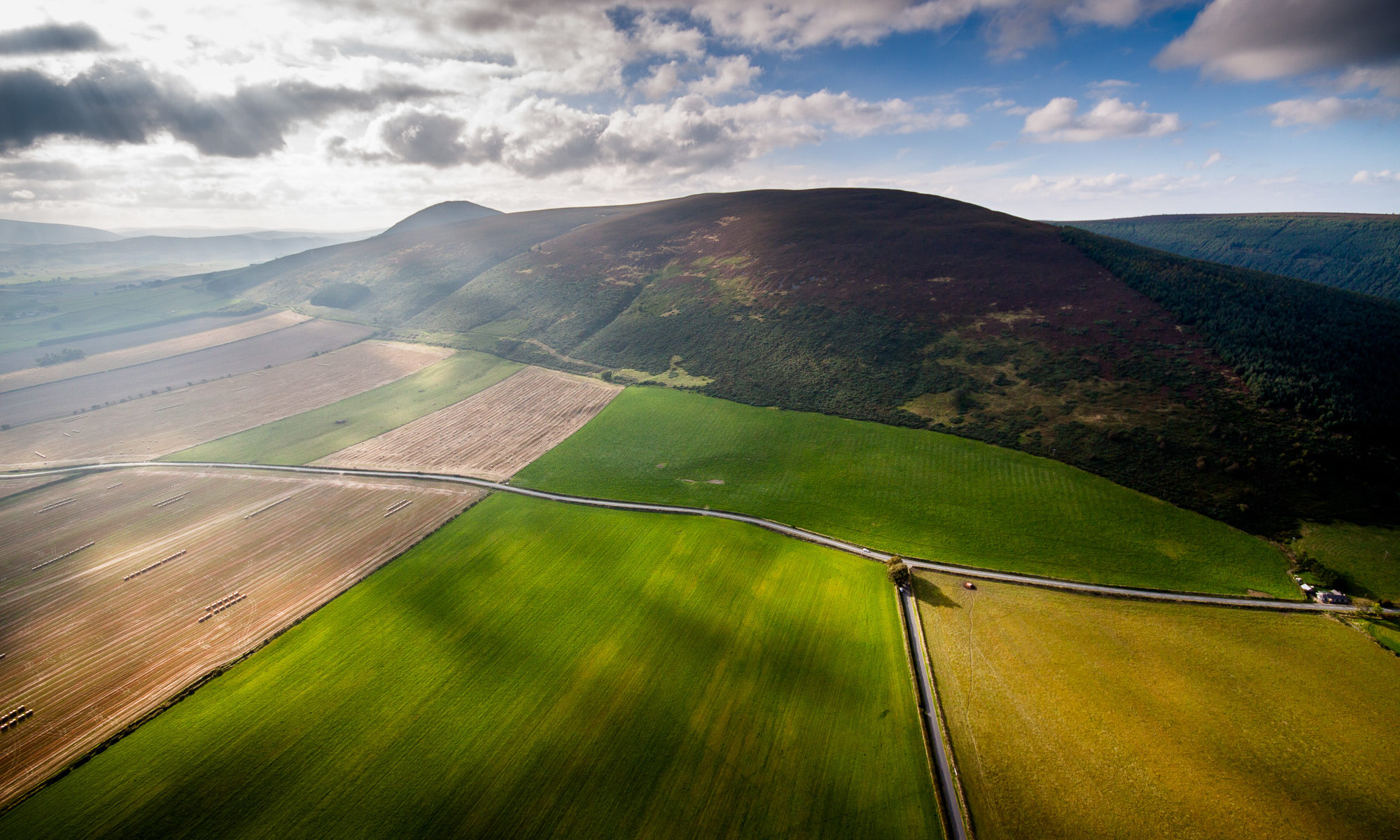 Hill of Noth is a 2km ridge extending north-east from Tap O’ Noth and is most commonly flown in summer evenings when a sea-breeze has reached Strathbogie.  The ridge faces south-east, but if the wind is a little more south, soaring can be extended to Tap O’ Noth in the same flight.

East through south, but best between ESE and SSE

The junction where cars may be parked lies on the A97, 3.5km north of Rhynie and 10km south of the A96 at Huntly. From Aberdeen, continue through Insch to Kennethmont, taking the road signed for Rhynie immediately after the village.

At the junction, use the gate on the west side of the road to access the field, then walk directly towards the hill, crossing through the gap in the fence at the top of the field on to the hill. Track a little to the right as you ascend through the bushes, generally following existing tracks to break out to the clear heather further up. Alternatively, follow the contour north-east to the edge of the forest plantation, then follow the edge of that up the slope.

Exercise your outdoor access rights responsibly, particularly when entering and crossing the field from the road to the base of the hill. There is often livestock in this field, and surrounding fields. Take care to cause no disturbance to livestock.

The fields to the east of the A97 may be a better choice of landing if there is livestock in the field to the west of the road. In any case, be respectful of any crop growing in the fields, this includes grass, and move to the edge of the field to pack up.

Power lines run along the base of the hill, parallel to the hill. Near the launch and landing area they are situated just above the edge of the agricultural fields.  The lower areas of the hill have more obstacles and are less appropriate for slope-landing, therefore always ensure you can glide safely over the power lines.

There is no specific launch area, so pilots must be confident in choosing an appropriate area to launch.

There is no official landing area and there is often livestock in the fields around the road junction.

Beware of the potential for stronger winds aloft if choosing to launch relatively low on the hill.

The hill is mostly covered in a thick layer of heather. Beware that this may conceal rocks, branches, fence posts, and fencing wire.

All fields near the road junction are sloping.

The upper part of the hill is consistently smooth but thick heather. It is possible to launch below the heather line, particularly in a small grassy bowl a minute or two from the base of the hill.

Often the wind will have a southerly bias, in which case it will make sense to plan to fly the southerly beat immediately after launch to get best established.

There are no official landing areas, simply choose afield which primarily has no crop or livestock in it. The field to the north-east of the junction most commonly has crop growing, whereas the other two fields more commonly are for grazing livestock. The fields all continue sloping away from the hill.

The ridge has a consistent slope which is slightly steeper at the north-east end, where the recommended launch areas are, and this end is a good area to fall back to if conditions become marginally light.

Any southerly bias increases the possibility of soaring round the south-west corner and even on to Tap O’ Noth.

In summer evenings, floaty restitution-like conditions may be found by pushing out from the hill once established.

In stronger conditions, large bands of lift out front and above ridge height have been experienced, perhaps being wave from the Correen Hills.

Airspace associated with Aberdeen airport lies to the east, 16km from launch at the closest point, with corridors extending north-west and south-west of the airport.

Lossiemouth and Kinloss airspace lies approximately 40km to the north-west of launch.