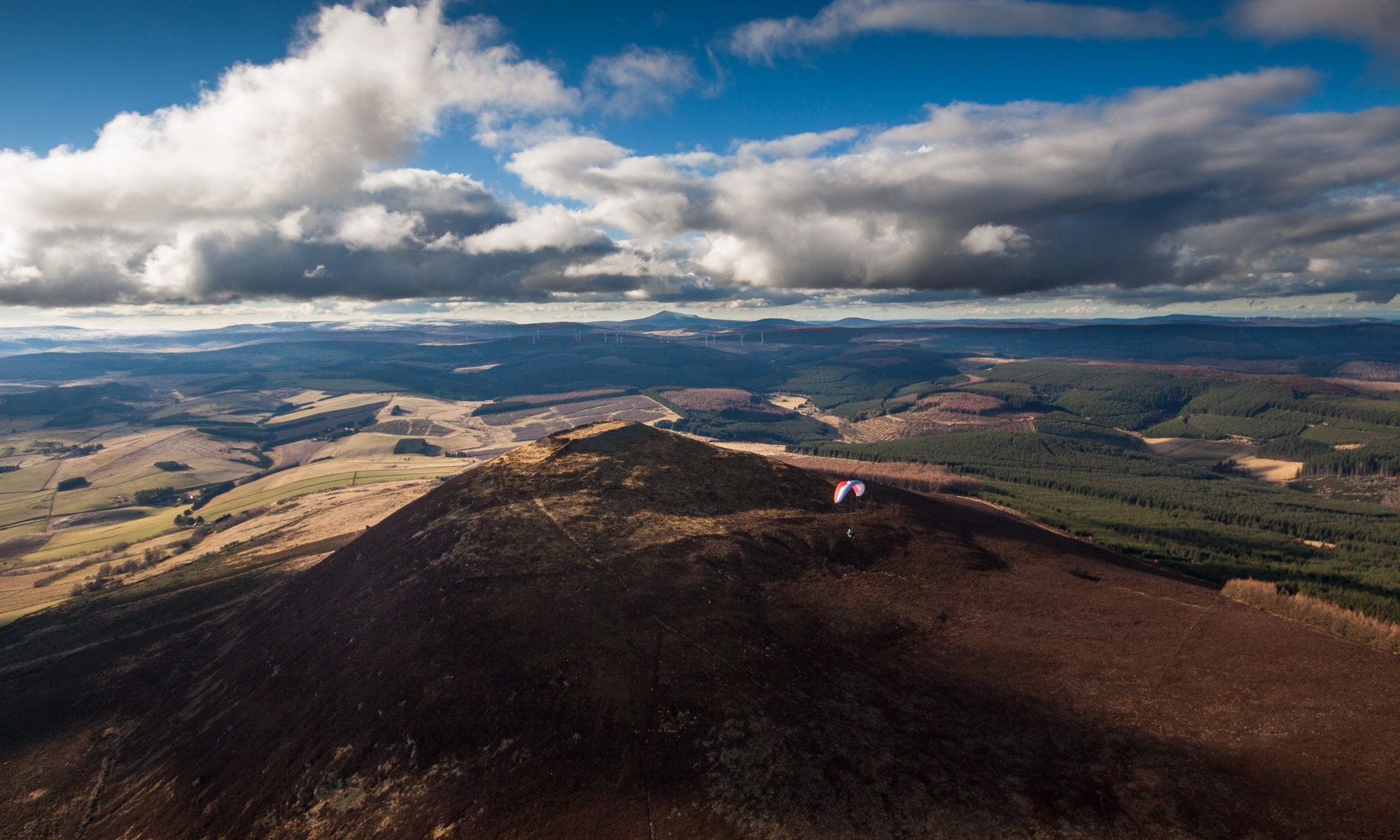 Overlooking the village of Rhynie, Tap O’ Noth is a popular site due to its ease of access and ascent, open launch area, and steep south face offering both good soaring and XC potential. The ‘Tap’ and its shoulder range – Hill of Noth – often offer pleasant summer soaring driven by sea breezes reaching the hill later in the day.

At 563m amsl, Tap O’ Noth is the second-highest hillfort in the UK and offers views to the north and east coasts of Aberdeenshire, as well as to Moray and Deeside.

Be mindful of livestock in the fields around the carpark, and stronger-than-expected wind on launch.

It is possible, but not recommended, to launch from the north side of the hill. This should be done with extreme caution and consideration of lee-side effects if the intention is to land near the car park.

Rhynie lies on the A97 between Huntly and Alford. From the village centre take the A947- signed for Dufftown and Cabrach – for 2km then turn right up the narrow lane – signed Tap O’ Noth carpark – for 100m before turning left in to the parking area.

Walk back out of the car park and turn left to follow the lane up the hill. After a few metres, cross the style beside the gate to enter the farm land. Continue directly uphill through the field into the path of trees until you reach a gate through the deer fence. Turn left after going through the gate, now following a wide track gently climbing north-west. After 700m the path turns right at the mobile phone mast; follow the fence-line uphill then pass through the gate at the north-west corner of the fenced area. Continue up the now-steeper track to the peak. Alternatively, from last gate, bear right towards the base of the hill where you will find a thin trail that ascends directly up the face of the hill. This route has the advantage of allowing an assessment of the change in wind strength with height to be made on the ascent.

Vehicular access to launch is via Mains of Lesmoir farm, 1km west on the A947 past the Tap O’ Noth car park. Check in with the farm for available hang-gliding landing options, then follow the farm road north for 1km towards Old Merdrum. As the road crosses a burn, there is a sign for the Old Merdrum forest land. At this point, follow the track right in to the forest. You will need a Forestry Commission key to unlock the gate to continue. Vehicular access is currently being re-applied for. Contact the sites officer for more information on vehicular access.

There are often sheep, and sometimes cattle, in the fields either side of the walking track between the car park and the first gate. Livestock are normally free to roam between the two fields, therefore do not presume that livestock will be in the same field as observed on the walk up.

Previously it has been advised not to land in the fields adjacent to the car park due to landowner hostility, however in recent times no such problems have arisen from responsible landing in those fields.

The south face is particularly steep, and the take off area often exhibits the locally increased wind-speed associated with compression of the airflow over the hill.

There are numerous large rocks around the launch area, and the entire peak of the hill is the rubble of an ancient fort. Be mindful of where you may be dragged if you lose control of your wing when choosing where to set up for launch.

Heather may conceal rocks, posing a hazard for top- and slope-landing.

Beware of wave turbulence, particularly if the wind is west of south.

The top-landing area may be very turbulent in a south-westerly wind.

Do not land in the area inside the fort; the area is significantly lower than the surrounding wall and will therefore be in the lee of the wall in any wind direction.

Powers lines run from the car park west along the fence line, where they meet lines which run north-south from the main road to Brae of Scurdargue.

The landing fields above the car park are sloping, uneven, may contain livestock, and may be in the lee of the belt of trees that separate the two fields.

Clashindarroch forest lies to the north and west of the hill. Always ensure you have a landing option within comfortable reach.

A deer fence runs along the base of the south face of the hill; be mindful of this if scratching low on the face.

The area between the base of the hill and the car park is very rough cut forest., the unsuitability of which may only be apparent once no other landing options remain available. If scratching low down the hill, consider tracking west towards the westerly extent of the walking path, where the ground is grassy, but be mindful that this ground is not as smooth as it looks and may conceal large rocks.

Be vigilant of aerial activity associated with the nearby Garioch Aero Club airstrip and the helicopter operations based at Dyce. See the Airspace Considerations section below for more details.

The most common place to launch is on a small grassy clearing in the heather, just below where the path turns left to ascend in to the hillfort. In light winds, launching in the area between the path and the base of the fort wall is possible, particularly the grassy patch near the map plinth.

In more easterly wind it is worth considering the flat shoulder immediately south-east and a few metres below the main launch areas.

The official landing fields are in a block of Forestry Commission land south of the A941, 1.5km south-west of launch.

The commonly used paragliding landing areas are the two fields above the car park, on either side of the walking track. Both fields slope enough to oblige landing in an easterly or westerly direction. On this approach heading the west field is concave in profile, with a watercourse running down the middle of it. The west field is bounded by power lines on its west and south sides, and by trees on the east. The east field, particularly at the top, is convex, and is bounded by trees on its west side and a farm to the south.

Typically the wind will have an easterly bias, therefore the east field is a safer option, being not in the lee of the belt of trees.

If either field has livestock in, or conditions make landing in those fields challenging, consider all other fields in the area, most of which are flatter and easier to land in. Take care not to confuse grass fields with those newly in crop.

It is possible to top on the flat shoulder immediately south-east and a few metres below the main launch areas.

Another landing option is in the grassy area beyond the south-west base of the hill, bounded by westerly corner of the walking path.

In a south-easterly it is possible to soar along to the north-east of Hill of Noth and back.

Typically, if there is anything more than a very light breeze in the car park – i.e. if the wind can be heard in the trees there – it will be strong, quite possibly too strong, on top of the hill.

Airspace associated with Aberdeen airport lies to the east, 16km from launch at the closest point, with corridors extending north-west and south-west of the airport.

Helicopters often fly at similar altitudes to paragliders, and have been witnessed performing training manoeuvres in the area between Insch and Rhynie.

Lossiemouth and Kinloss airspace lies approximately 40km to the north-west of launch.

Garioch Aero Club airstrip is situated 13km to the east, between the villages of Leslie and Auchleven (Premney).

27 February 2017: Chris Lawton flew an unusually early-season XC towards the Banff coast, flying past Aberchirder to log a 36.86km flight.